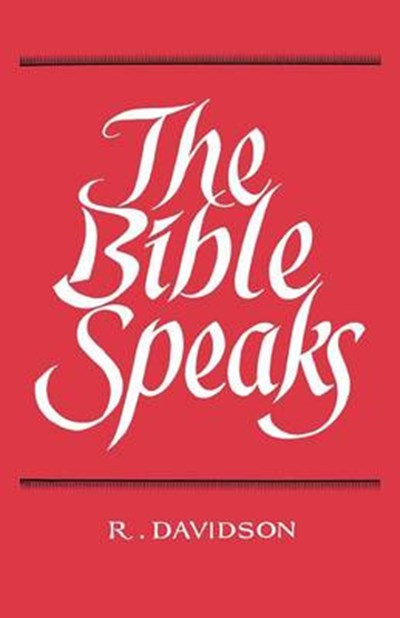 Join now Find out more
Publisher: Saint Andrew Press
ISBN: 9780715202418
Number of Pages: 260
Published: 19/07/2012
Width: 14 cm
Height: 21.6 cm
Description Author Information Reviews
THE BIBLE SPEAKS-but what exactly does the Bible have to say to us ? And what does it mean when it says it ? Neither question is easy to answer, for the Bible is not one book, but many ; the historical background, covering a great sweep of time, deeply affects the form and content of what the Book of Books has to say to us now. In this paperback re-issue of a work widely acclaimed when it was first published, Robert Davidson clarifies its central message and presents in plain terms the great themes : God, Salvation, Redemption, Sin, Judgment Grace and so an. He shows the why and the how and the when of the development of these great concepts, and lets the Bible speak for itself in such a way that Old and New Testaments are seen as one continuous story, centred upon the twin themes of God and 'the people of God'. At a time when the variety of the material in the Bible and the discontinuity between Old and New Testaments are increasingly and rightly recognised, the author shows that behind the variety there is unity and a fundamental continuity. Of the original edition The Times Literary Supplement reviewer wrote : 'It is a remarkably successful attempt to let the reader appreciate the general sweep of the Bible story.' ROBERT DAVIDSON was educated at the University of St Andrews and followed a university teaching career at Aberdeen, St Andrews and Edinburgh. In 1972 he was appointed Professor of Old Testament Language and Literature in the University of Glasgow. Professor Davidson has written a number of books as well as articles in a wide range of periodicals. Recently he contributed talks on The Word from the Old Testament to 'The Word for Today' series of Saint Andrew Press